While people in urban areas have different ways of accessing clean water, this is not the case for quite a number of individuals in rural and semi-urban areas.

In February 2021, I was on assignment in Kwaja which is a ward in Mubi South Local Government Area of Adamawa State, Nigeria. Kwaja is in a rocky area and borders a part of Cameroon. A handful of communities in Kwaja are solely dependent on various natural water source(s).

In several communities in different parts of Nigeria especially rural and semi-urban areas, children and women are tasked with fetching water for their families. However, in some communities in Kwaja, it is the men who fetch water for their households. While the children can choose to join their fathers or the men in this task, it is the primary duty of the men to collect water.

The diptychs in this photo essay feature portraits of the men versus the things and objects that are synonymous with their water collection. Other images in the photo essay give insight into what it is like to take on this task of water collection for the men in Kwaja, Adamawa state. It also sheds light on the challenges that they face due to the depleting water source in the area.

As the world continues to face the devastating impact of a rapidly changing climate, people in communities like Kwaja are constantly feeling the effect. Sadly, they are the least contributors to it.

All images taken while on assignment for WaterAID UK. You can learn more here. 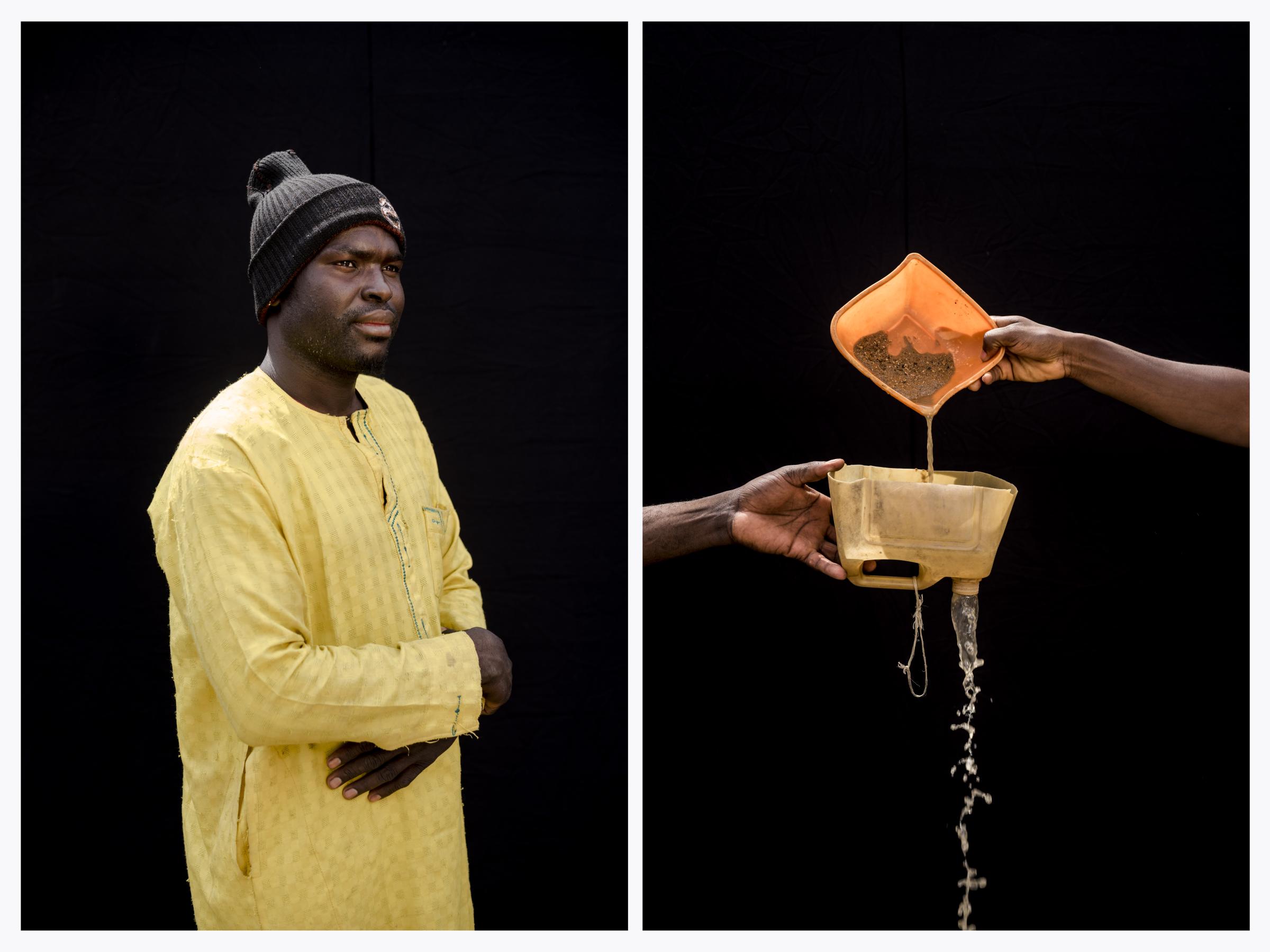 “I usually go out before the day breaks to fetch water for my family. It’s part of my daily chore. I make at least four trips to the stream before I am able to fill up all the containers at home.” 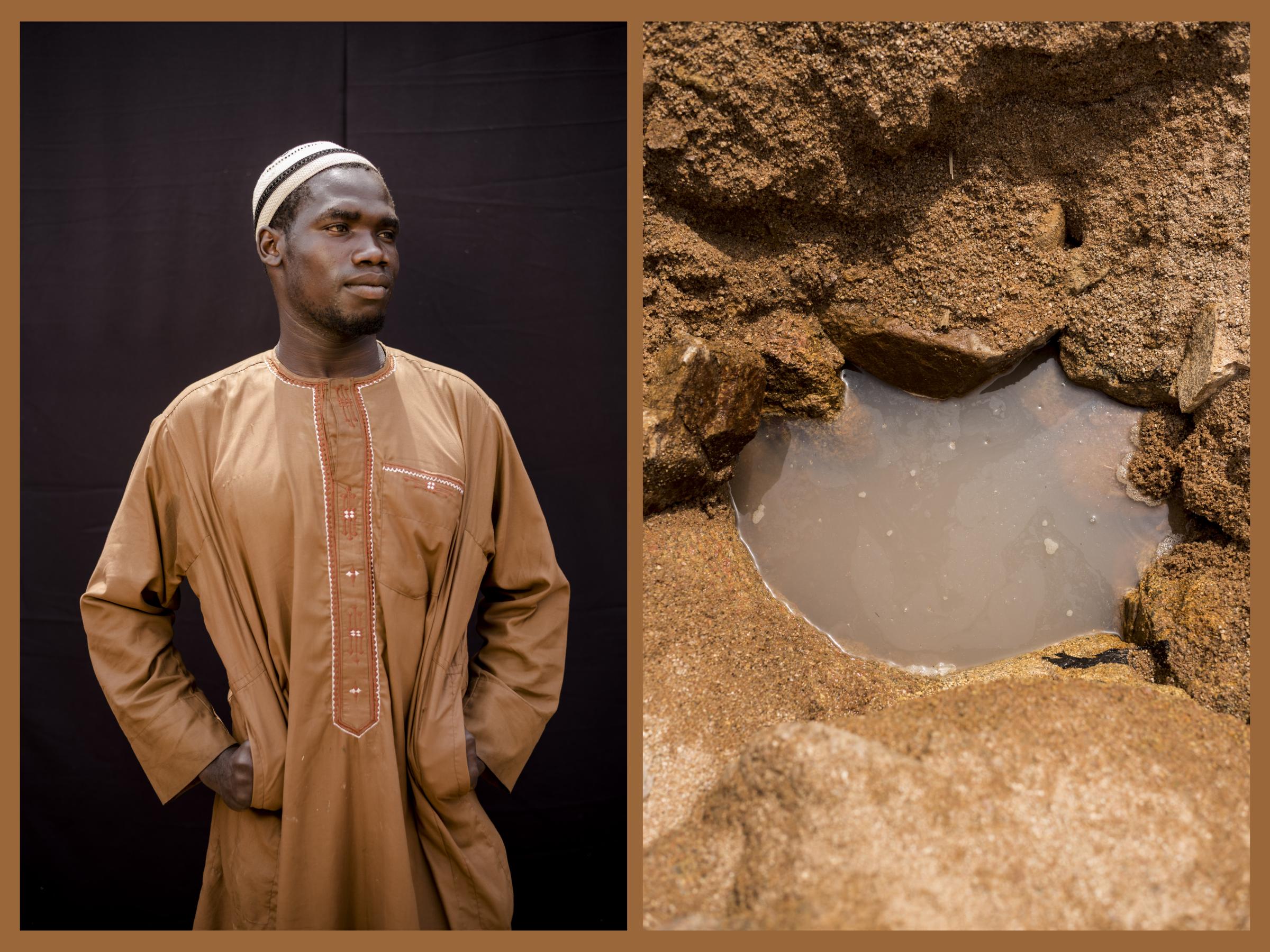 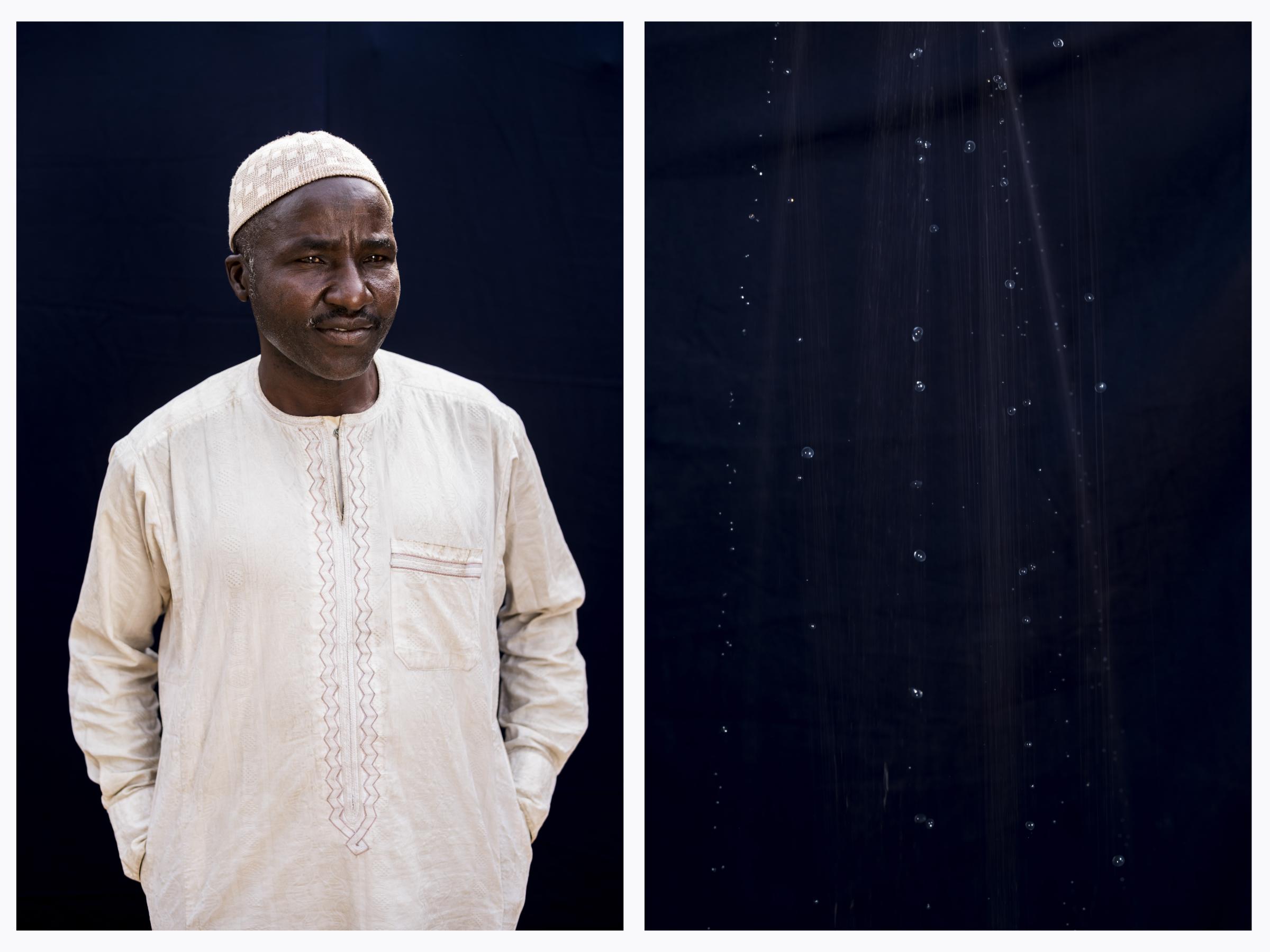 “During the rainy season, we store the rain in containers and sometimes it lasts for up to a month. However, during the dry season, I go and fetch water on foot. I go up to six trips a day to collect water.” 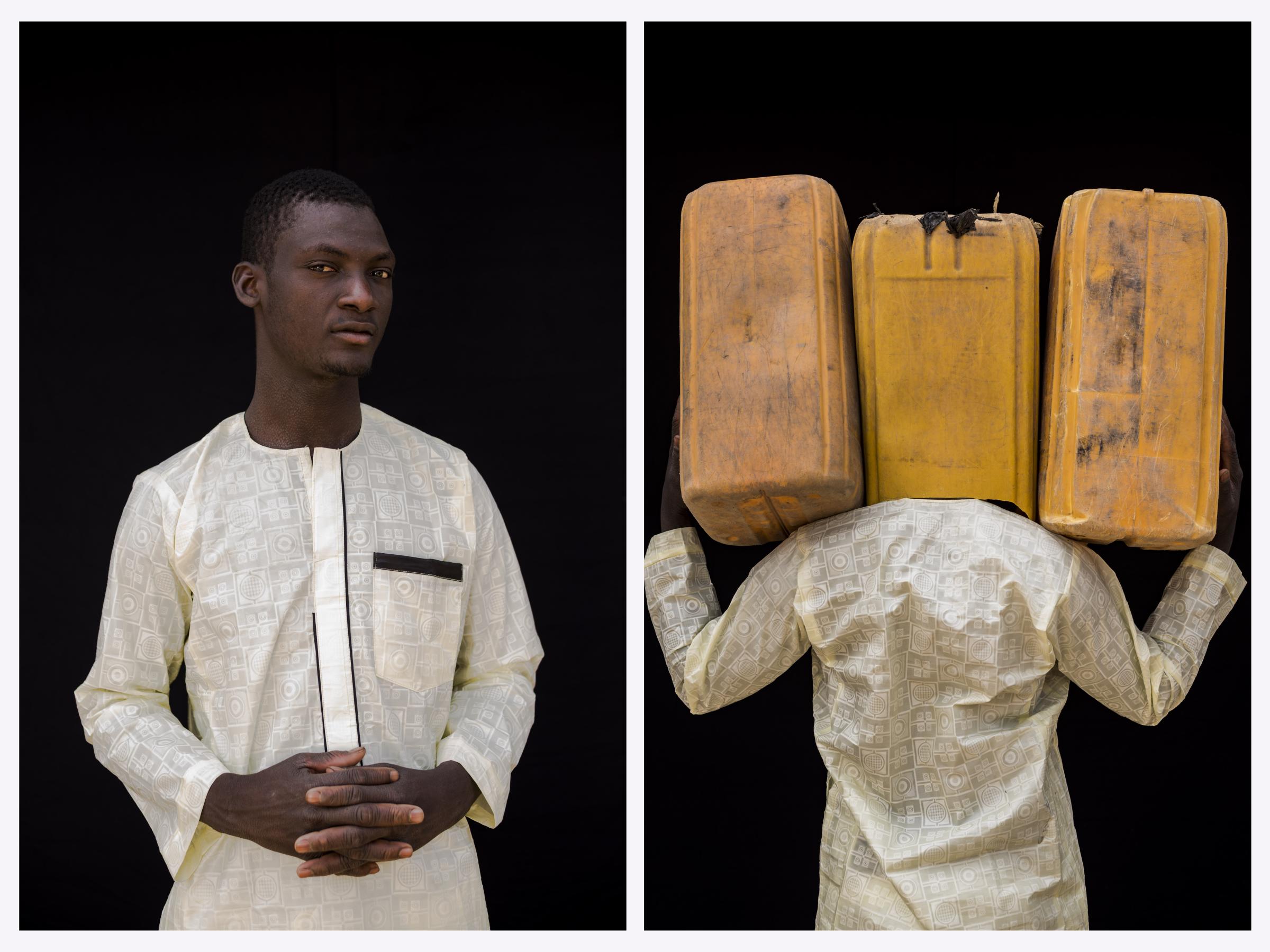 “We have a well in my community. It usually dries up in January and stays that way till the raining season begins. During this period, I have to fetch water from another community which is 5km away from where I live. I fetch water for my family and my neighbours who are not strong enough to fetch. I go on bike six times a day so that i can get enough water to fill up our containers and that of our neighbours.” 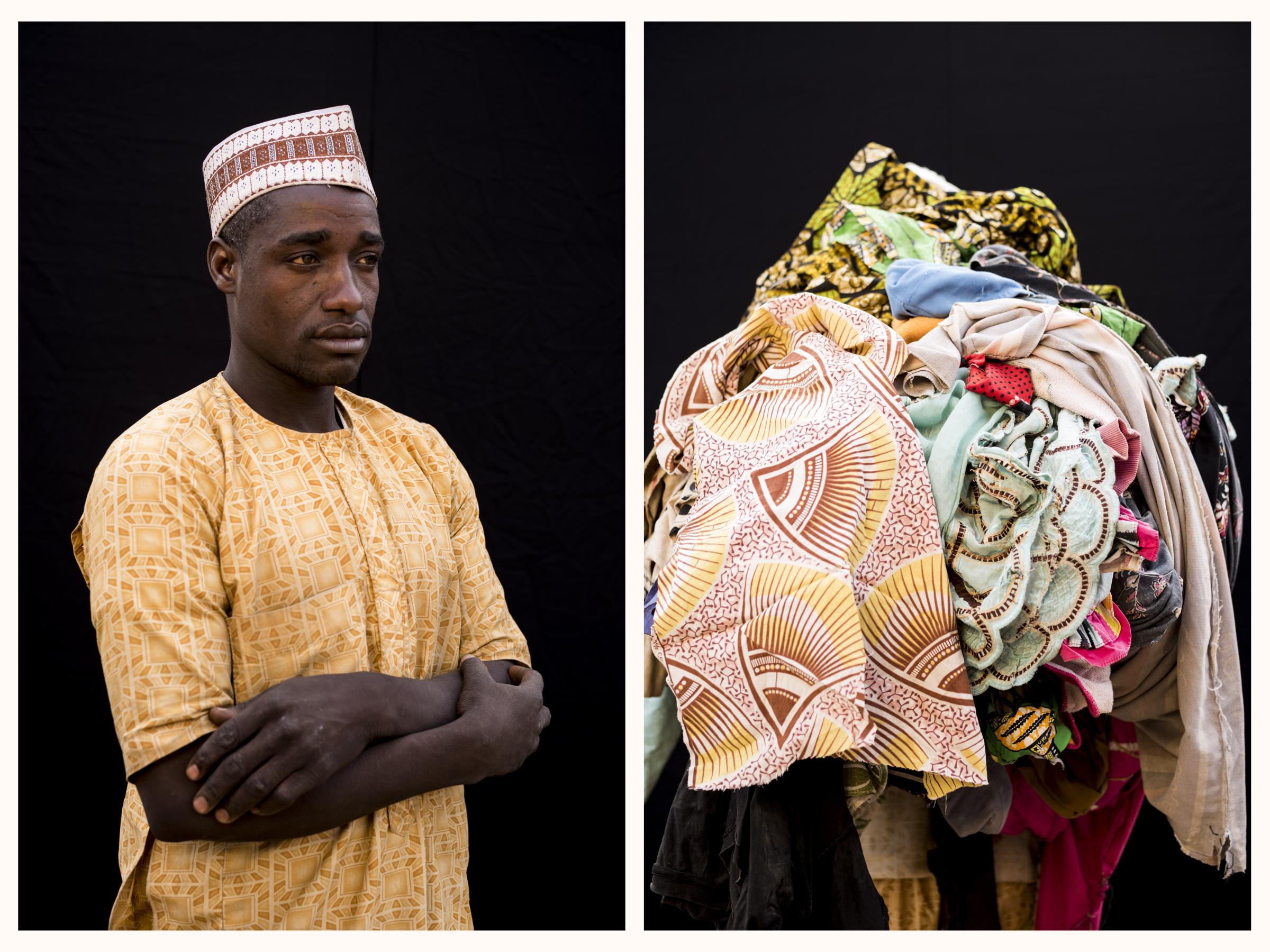 “I go out to fetch water for my family as early as 3am and I round off by 5am. I go early to avoid the queues. The water I collect can last for up to two days. However, when my children join me in fetching, we get enough water that can stay for up to five days. During the dry season, we minimise our water usage. We bathe once a day and we rarely wash our clothes.” 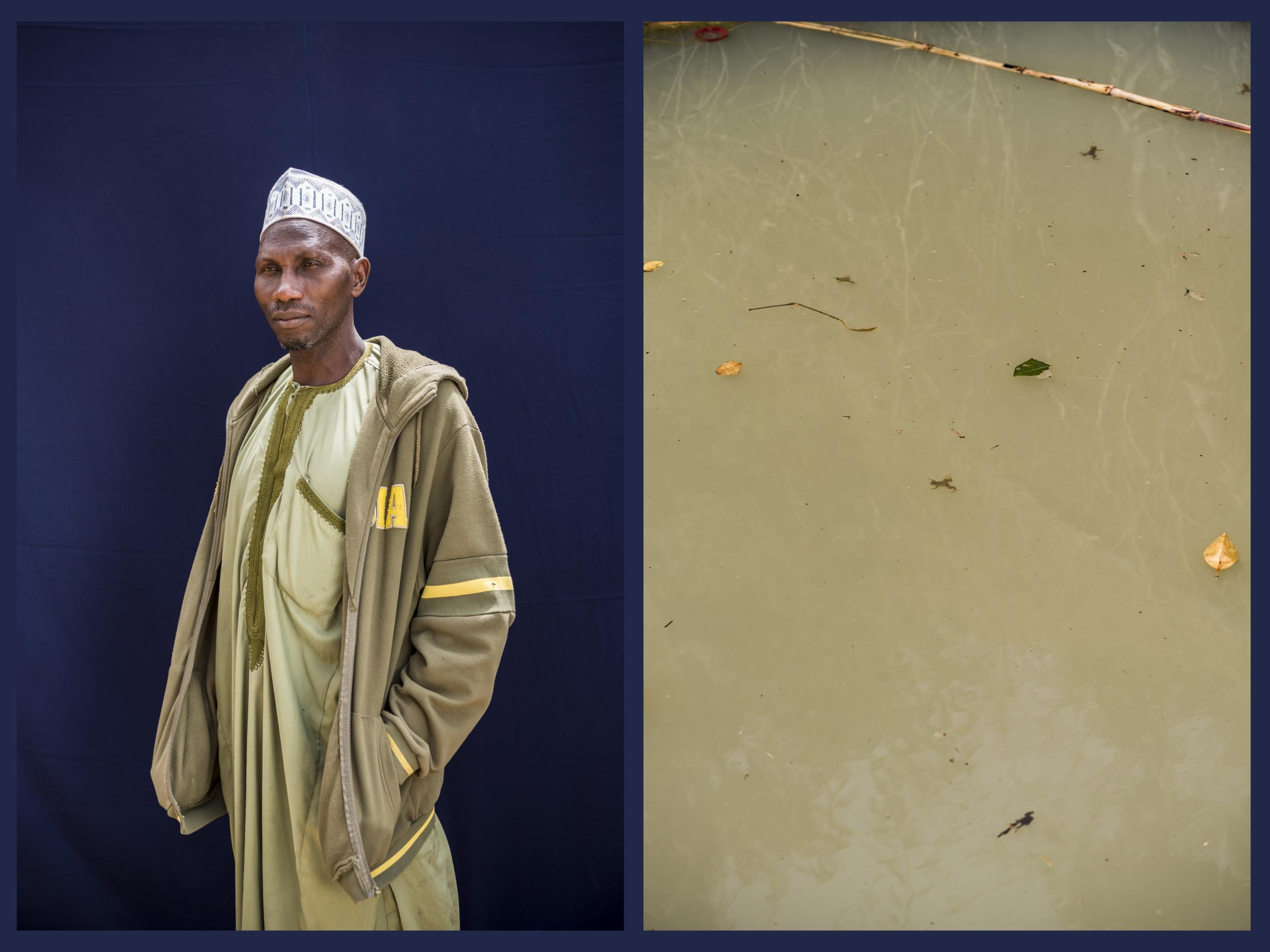 We have a pond in my community which has served as a water source for me and my ancestors. When the water level in the pond reduces, we have to dig it up. During this time, each family can only fetch up to one jerry can of water from the pond. I fetch water daily for myself and my family. I go to the pond at least three times a day.” 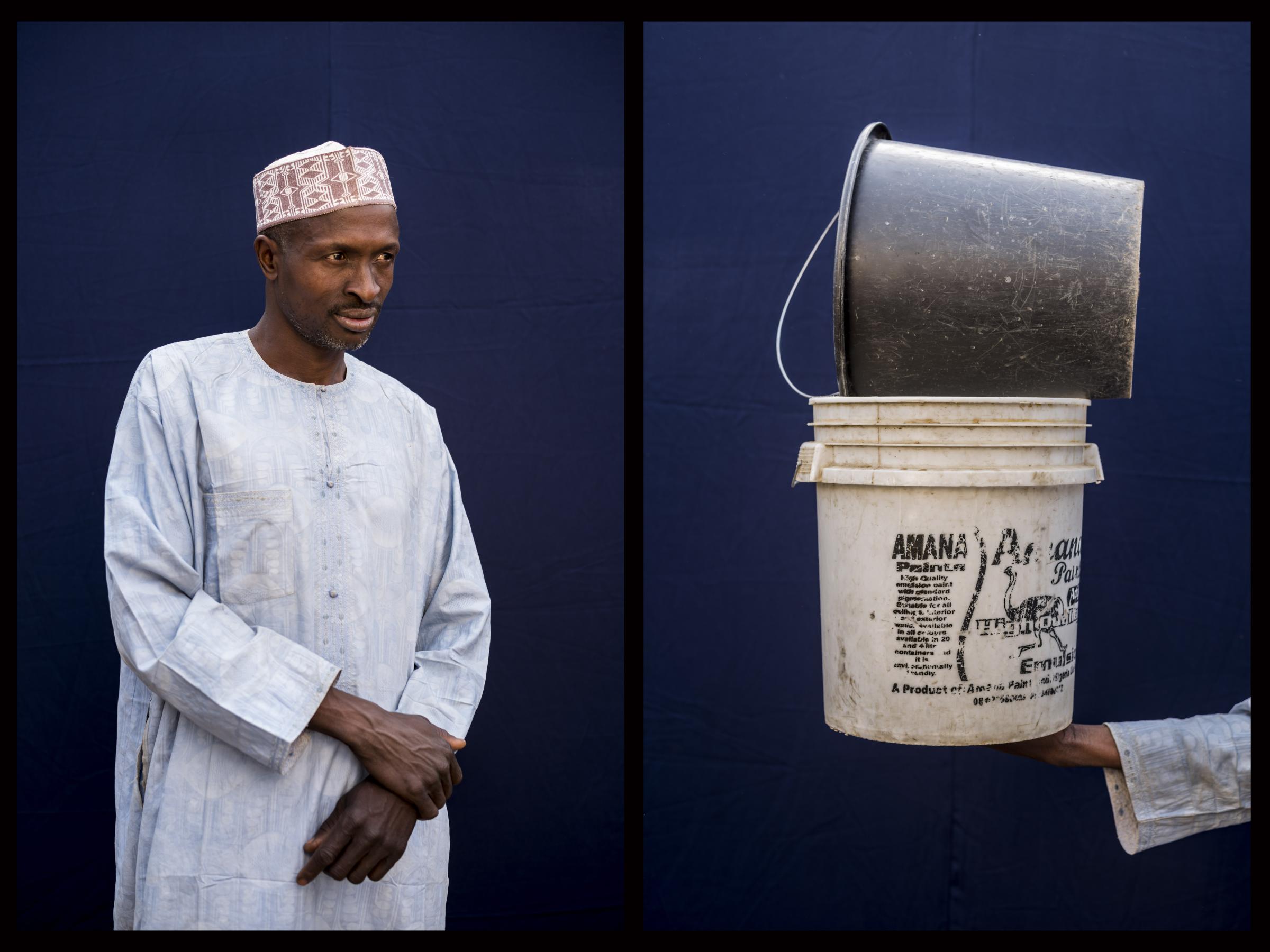 “I used to farm during the dry season but I stopped some years ago because of the shortage of water in our community. I go on foot to fetch water daily. I use buckets and jerry cans.” 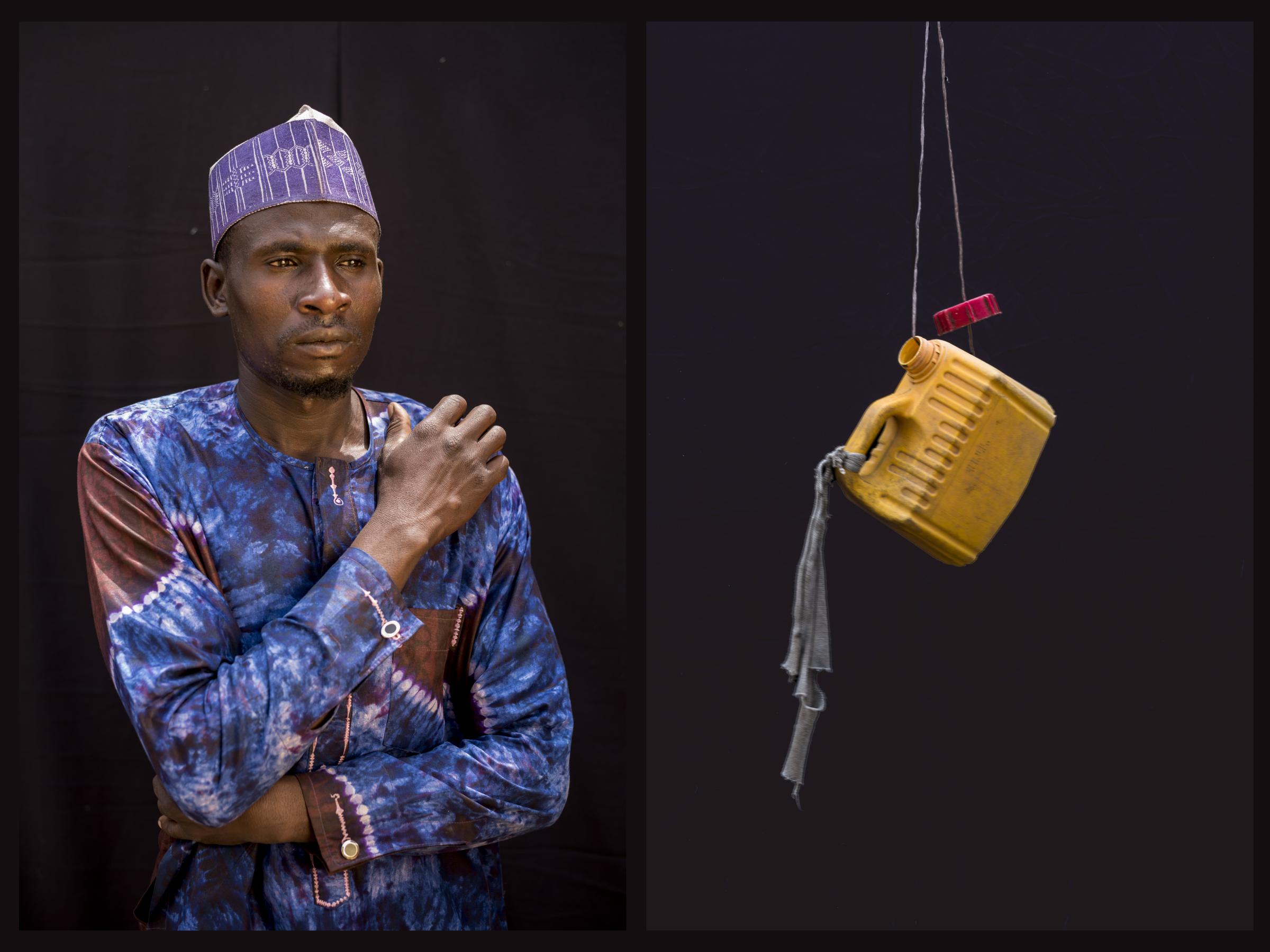 I use jerry cans to fetch water for my family daily. I make at least three trips on foot at midnight and two more trips in the evening to fetch some more water for my household. On rare occasions, when we have more need for water, I have to borrow a motorbike to make more trips to the stream or I buy water from water vendors.” 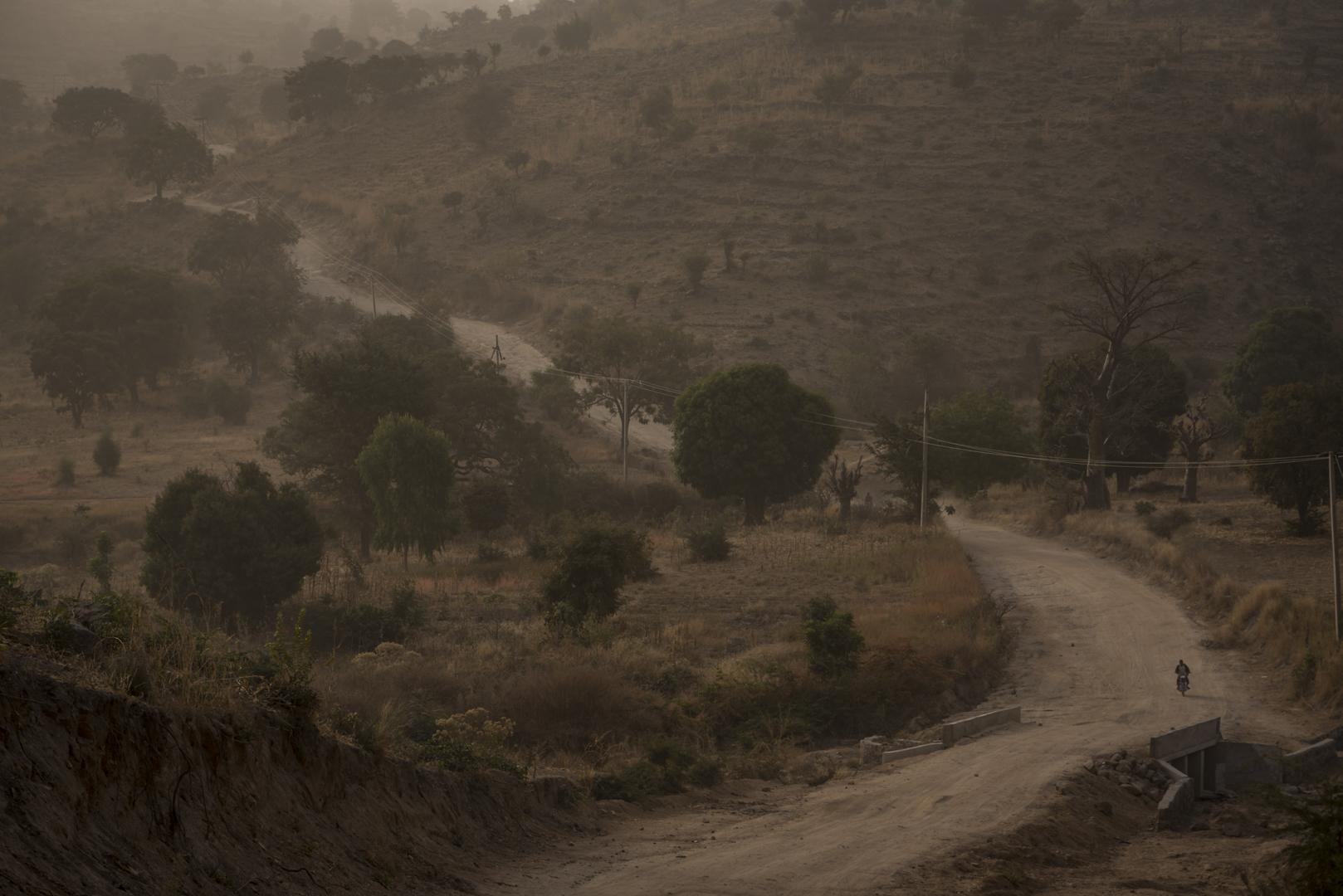 Kwaja community is located in a rocky area. It is approximately 8kms away from Mubi South, the local government headquarters. Kwaja community has a population size of over 25,000 people. 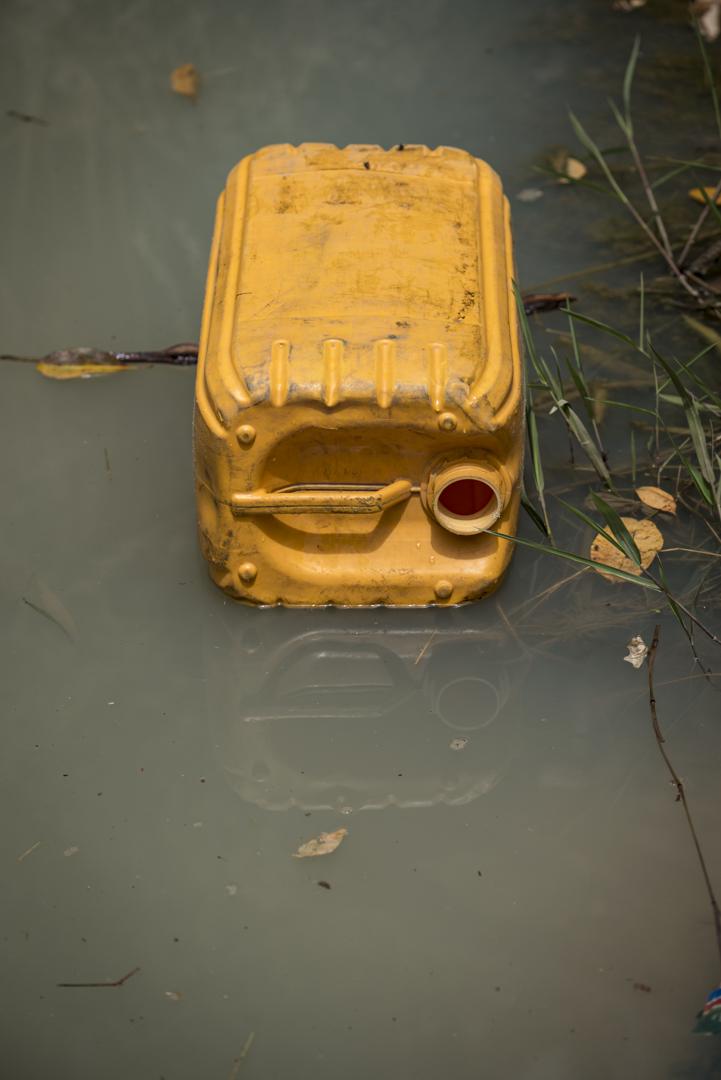 Jerry cans are synonymous with water collection in different parts of Nigeria. In Kwaja, many of the men who fetch water use jerry cans. 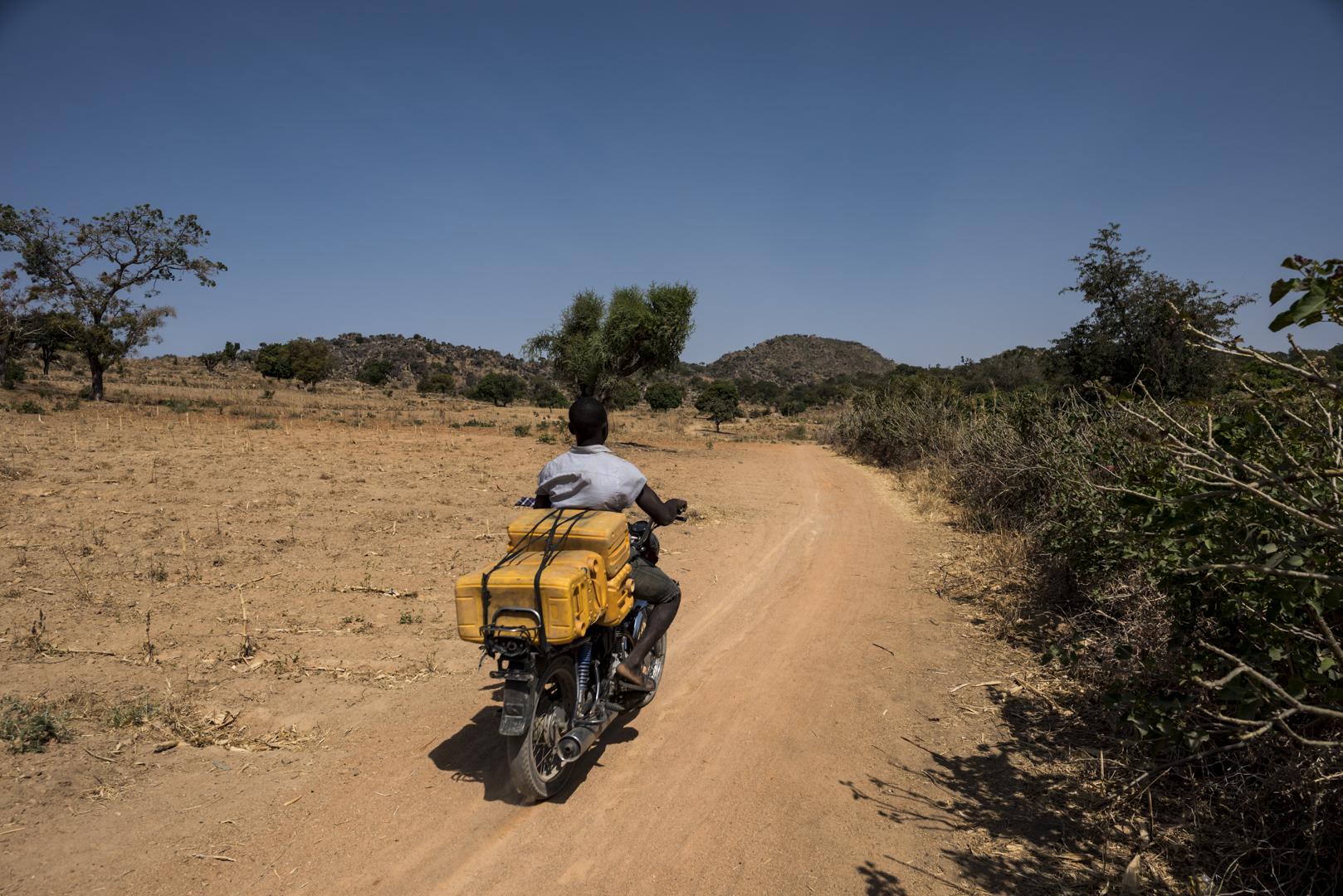 A man conveying water in jerry cans heads home after fetching water. Kwaja ward has a population size of over 25,000 people. Each year, the population increases while access to basic amenities dwindles. 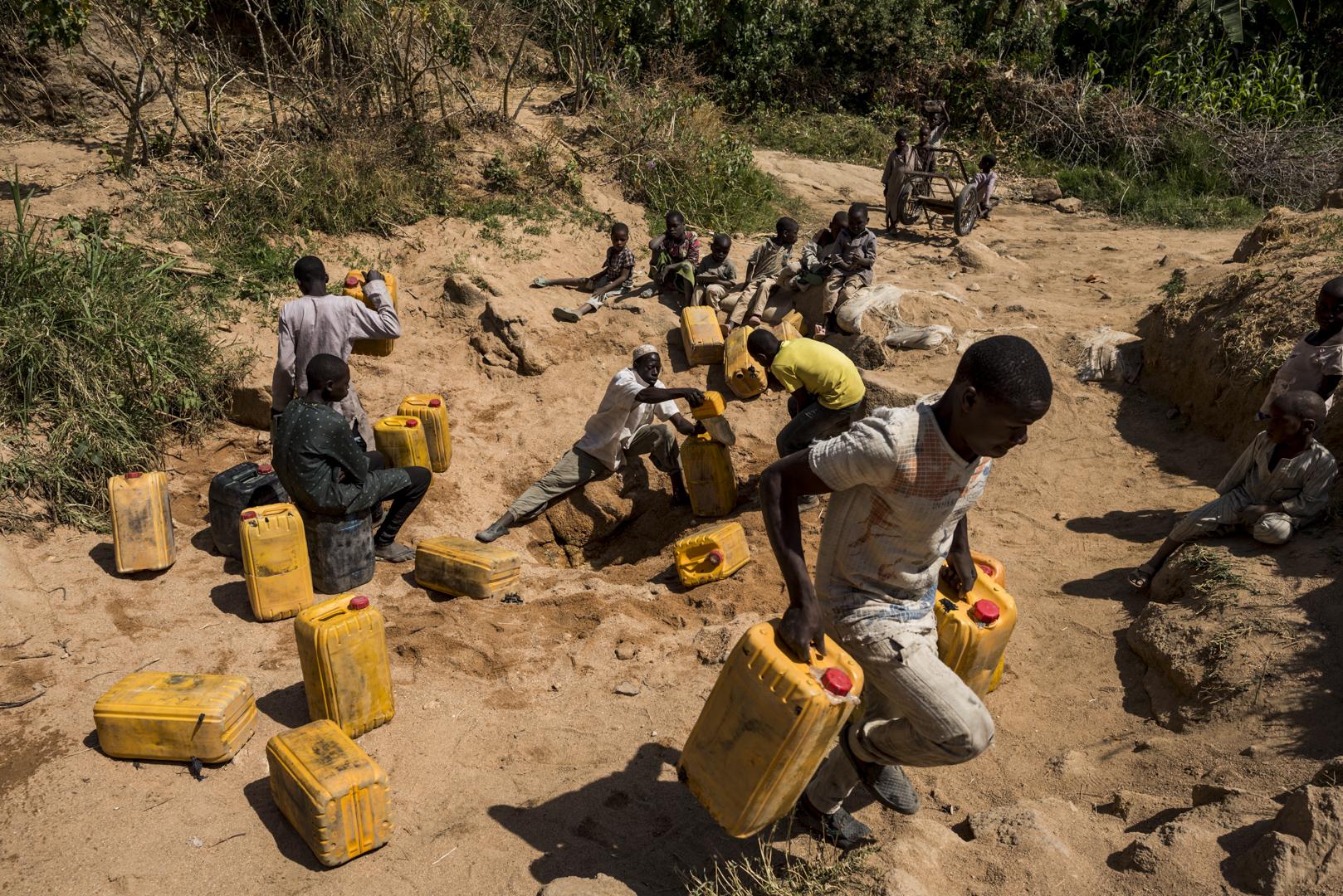 Locals in Kissa community in Adamawa fetch water from a stream. Dried up streams like this are a common sight in Kissa. In the dry season, the water in the stream slowly dries up. During this period, locals are forced to dig the ground further to make way for a new and oftentimes temporary source of water. 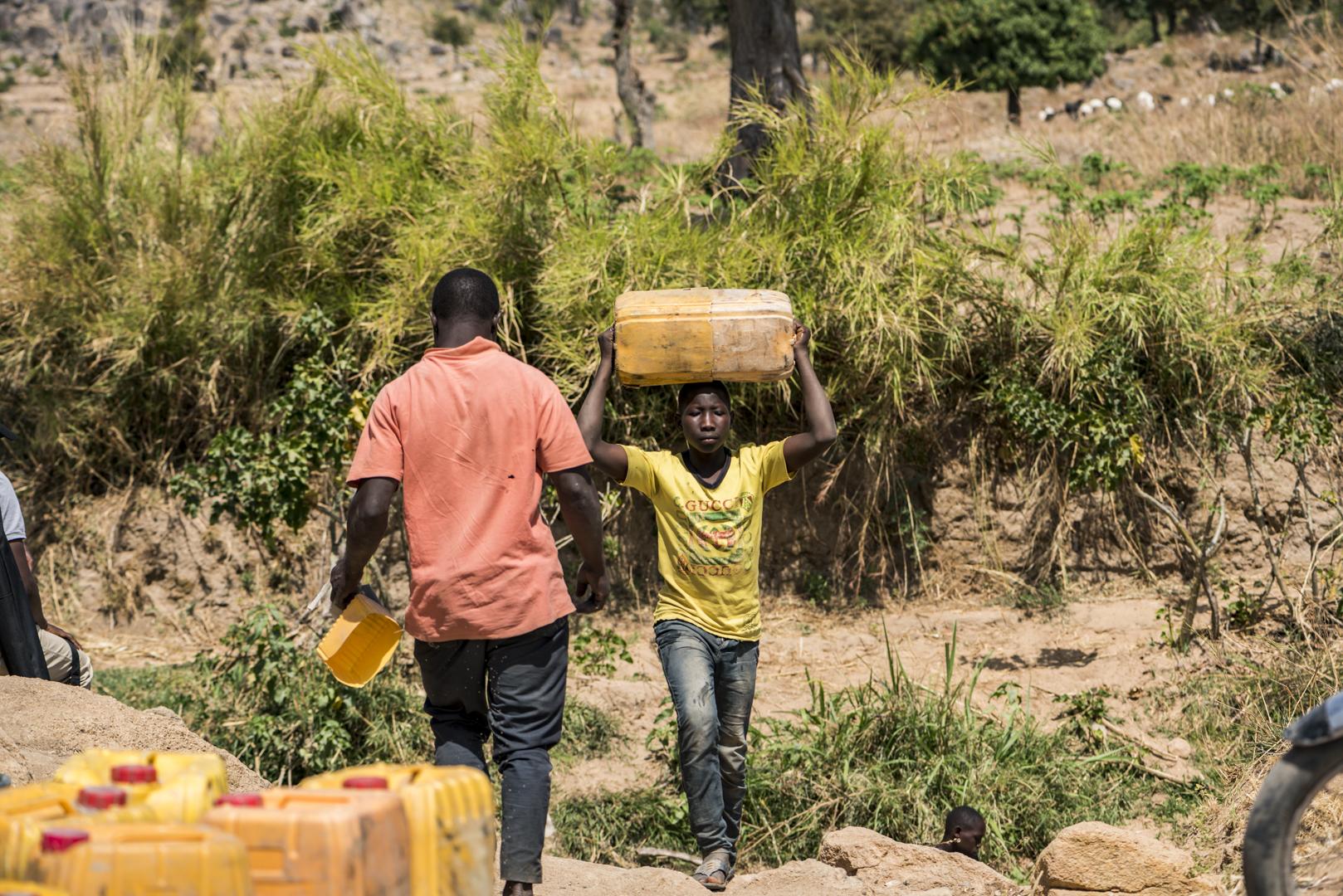 A young man carries a jerry can after collecting water from a stream in Kissa community, Kwaja village. 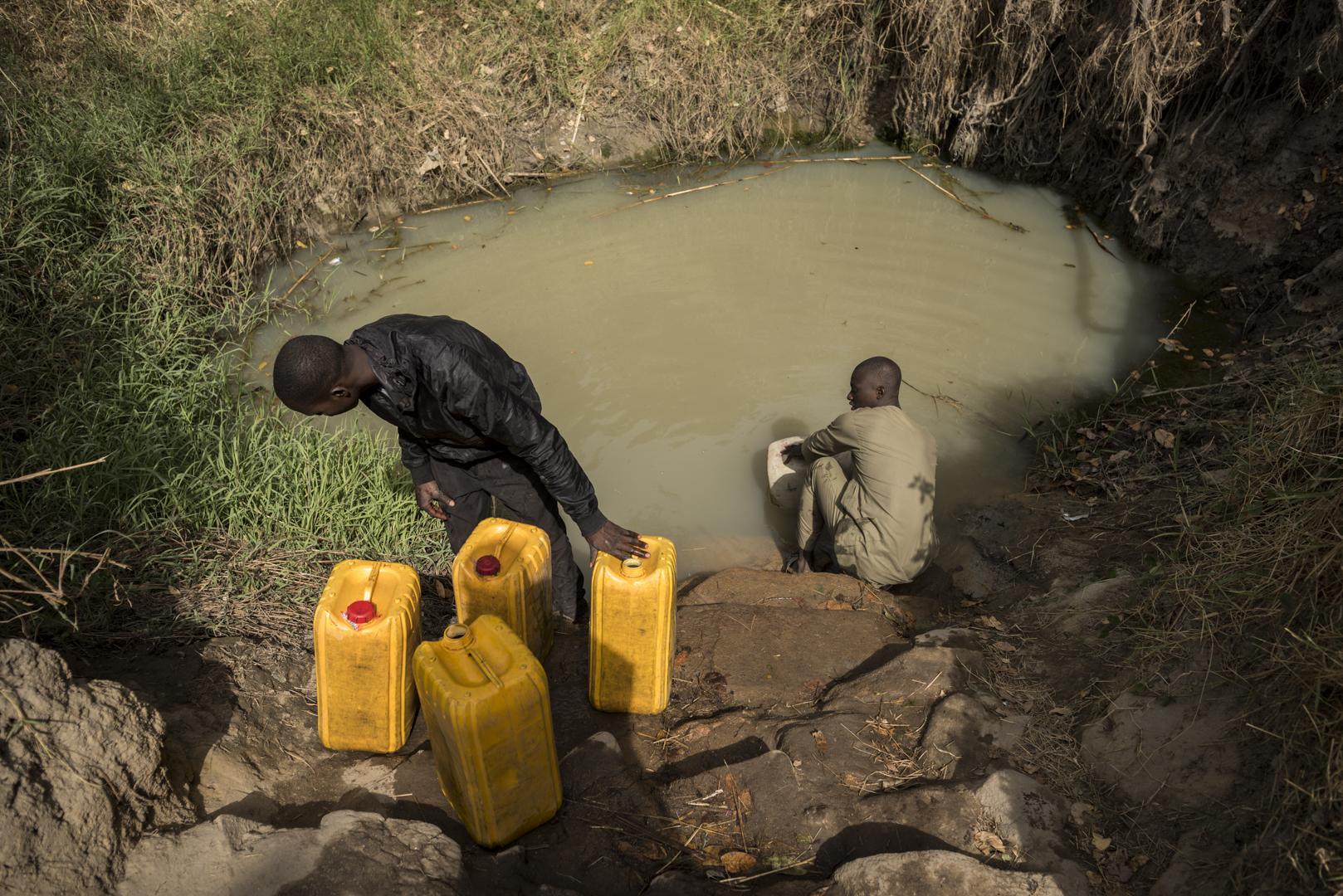 Mubarak collects water from the pond in Kinga community, Kwaja village, Adamawa. He also collects water for his neighbors that don’t have access to a motorbike or are not physically fit. 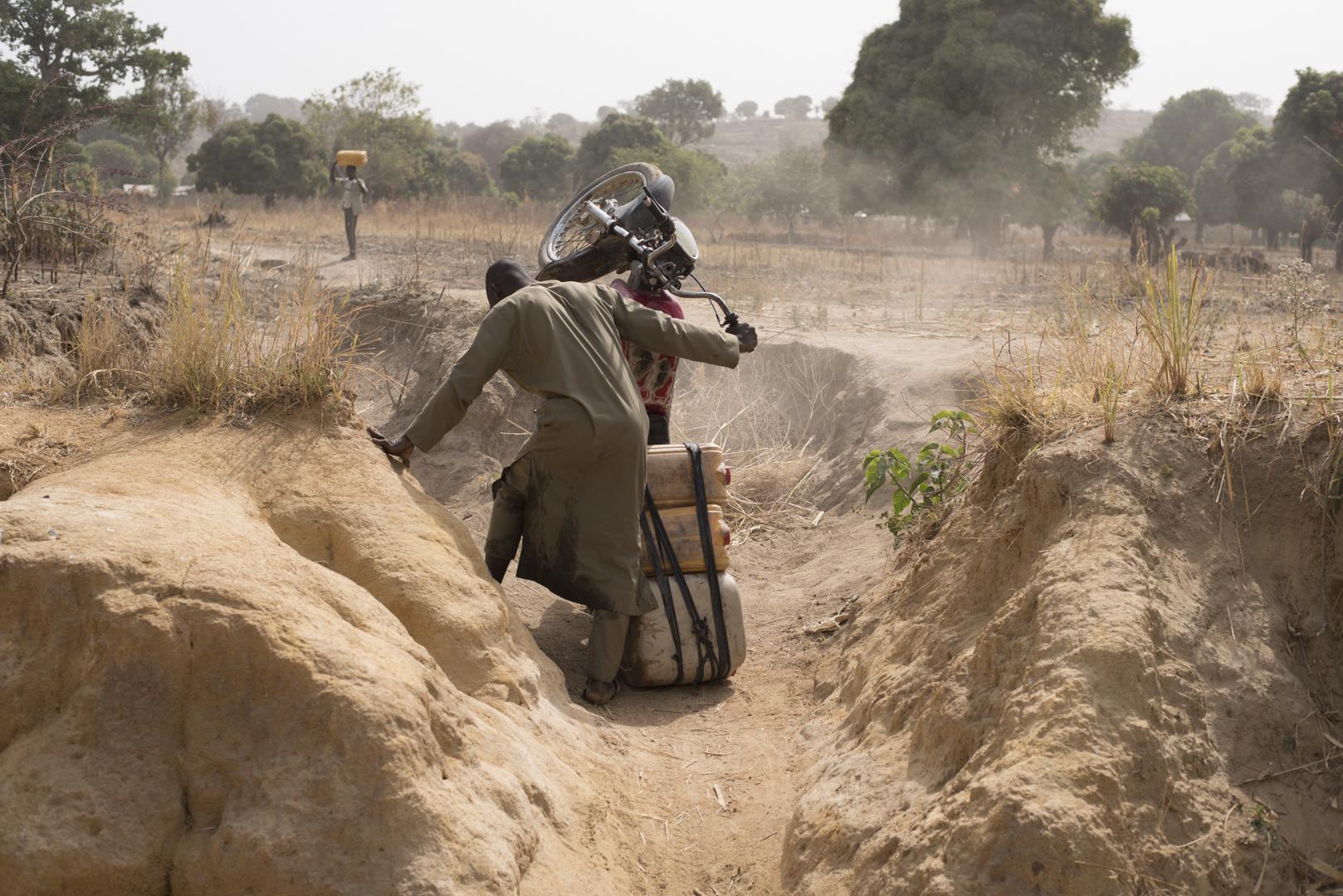 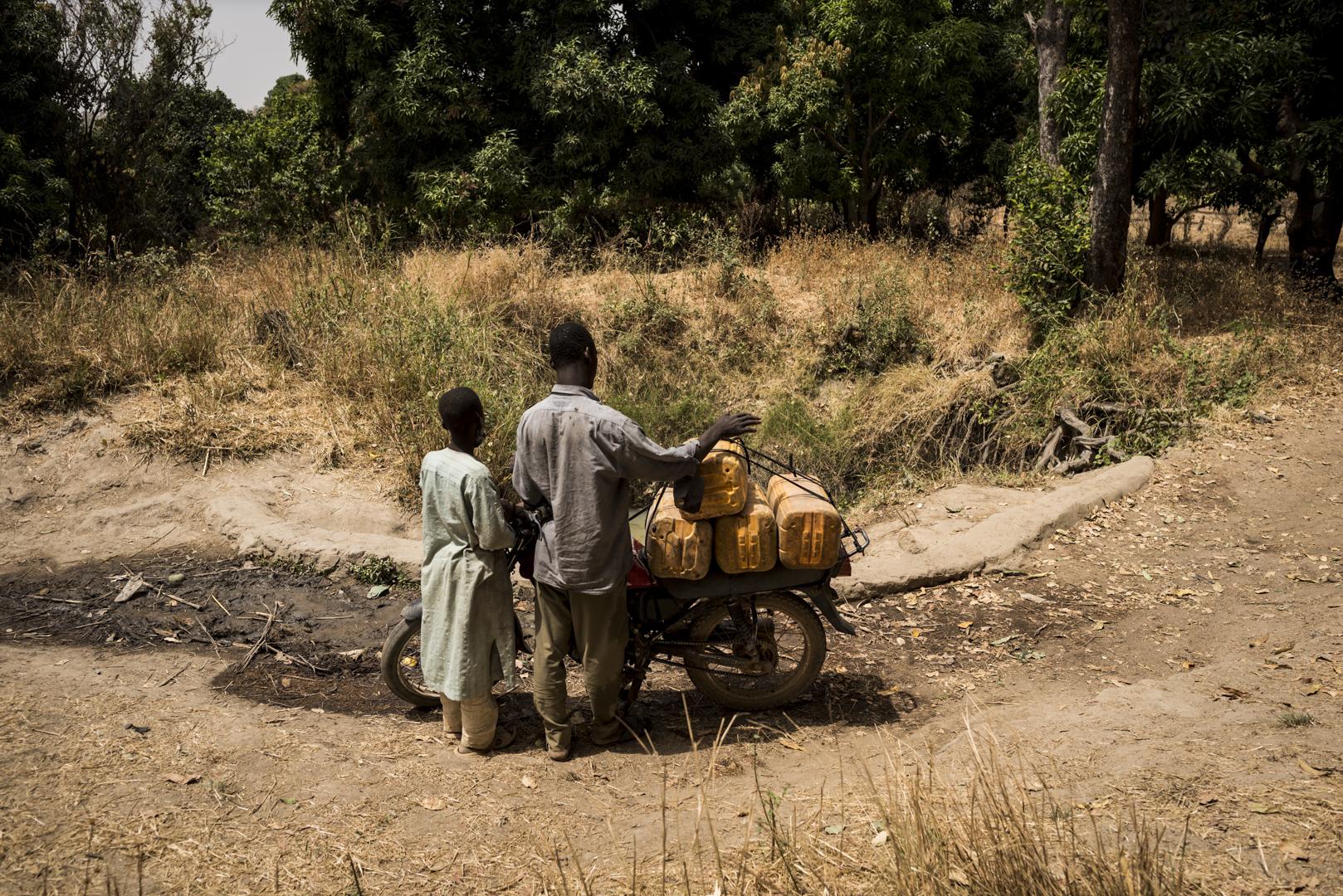 Locals transport water on a motorbike after fetching from the pond in Kinga community, Kwaja village, Adamawa. 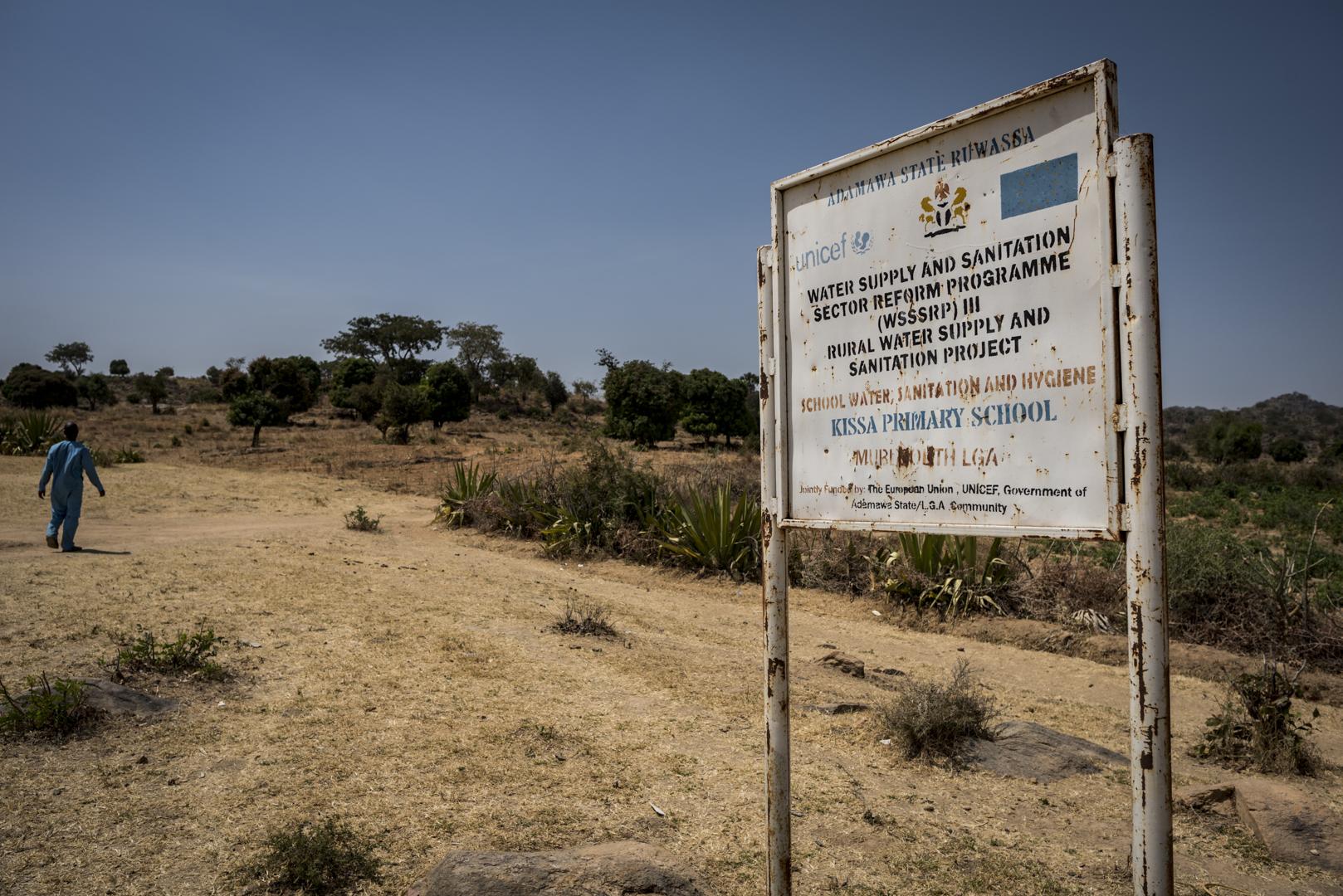 Ibrahim walks to his farm in Kissa community, Kwaja village. 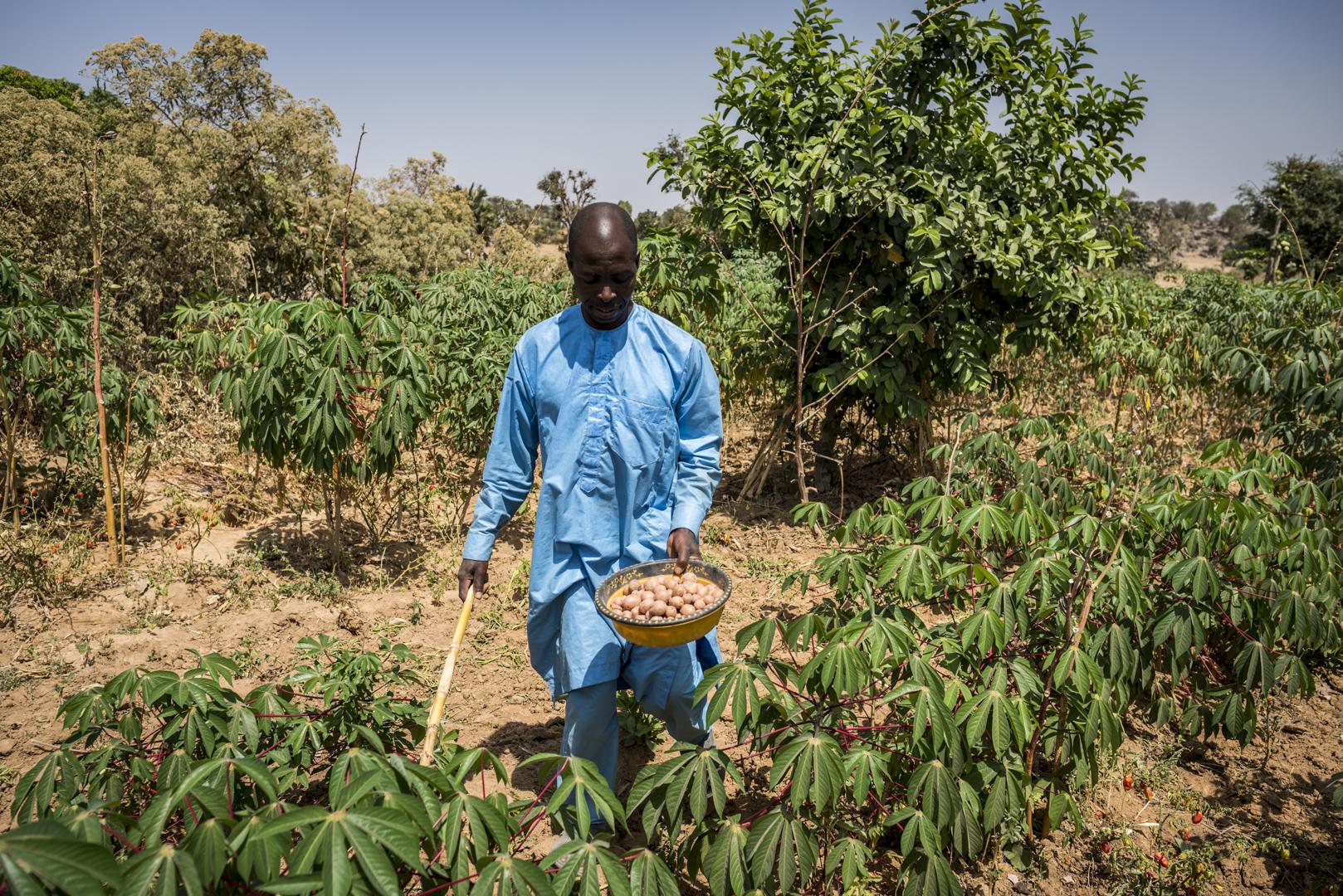 In recent years, Ibrahim’s crop yield has greatly reduced due to the change in weather. Like others in his community, Ibrahim has observed that the rainy season does not last as long as it used to a few years back. 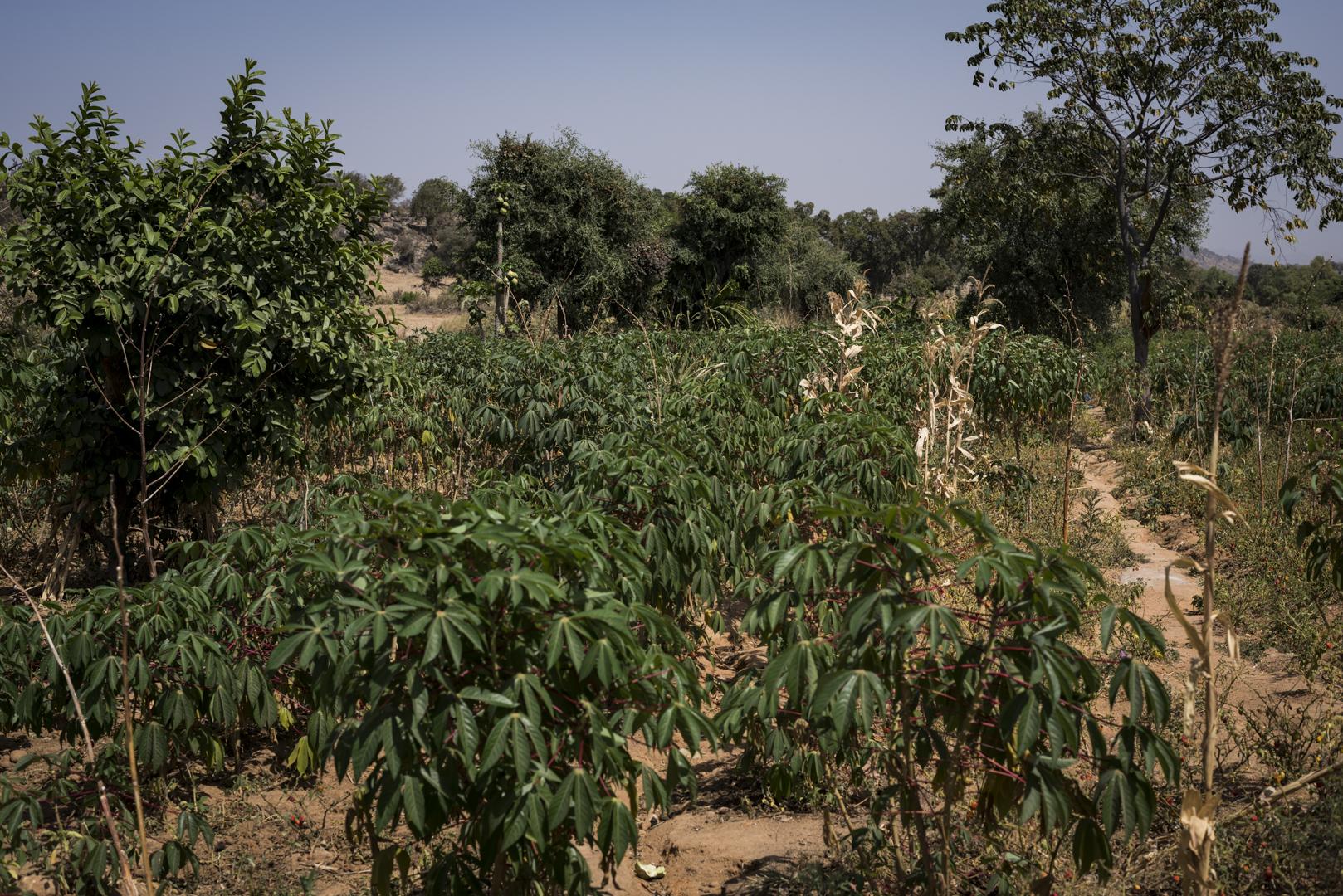 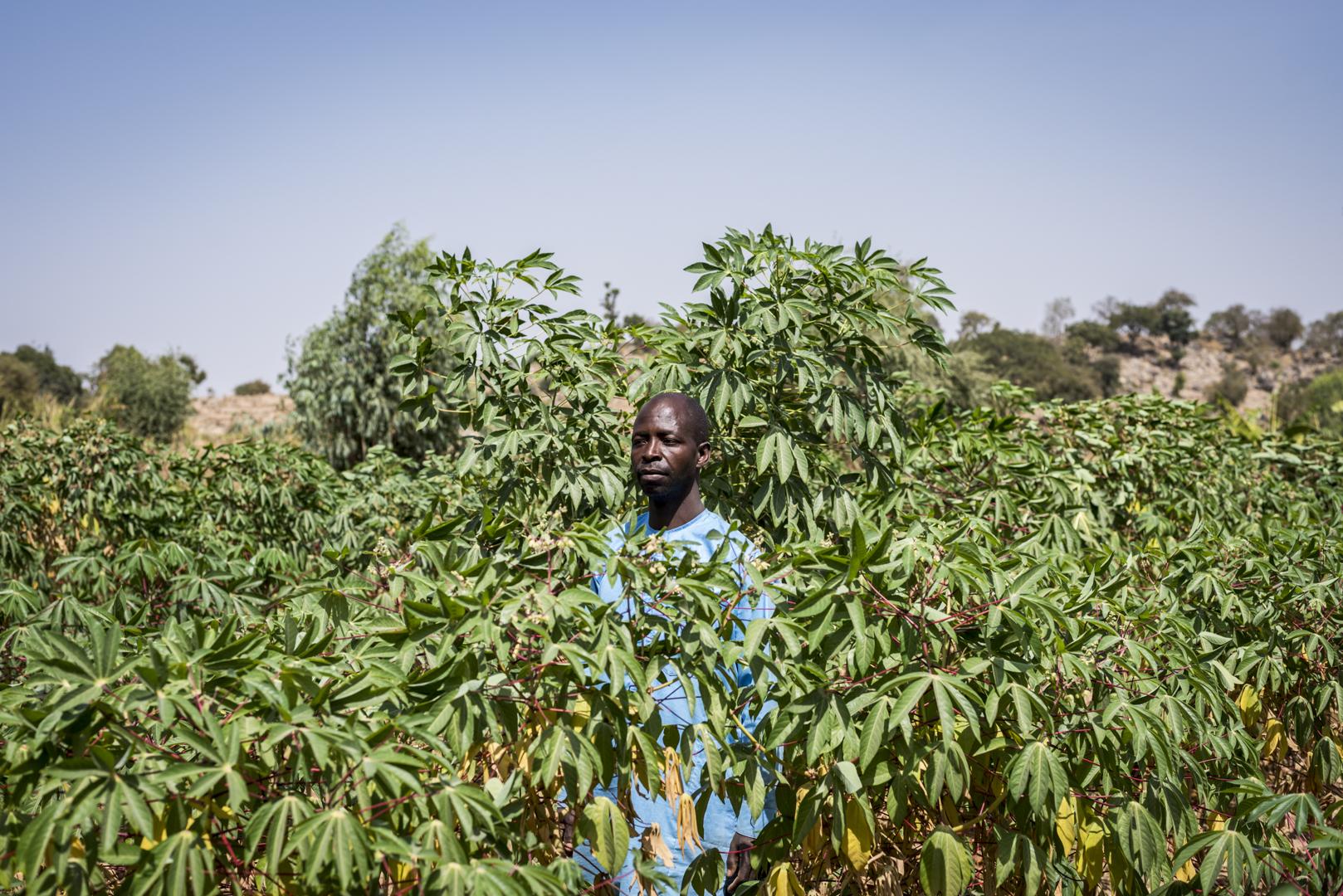 Ibrahim Idrisu, 45, is a commercial farmer. He farms various crops like potatoes, tomatoes, watermelons, peper, cassava, yam, carrot amongst other crops. In recent years, Ibrahim’s crop yield has greatly reduced due to the change in weather. Like others in his community, Ibrahim has observed that the rainy season does not last as long as it used to a few years back. Worse still, the stifling heat often dries up some of his crops. Irrigation farmers in Kwaja are faced with a lot of setbacks which affect their crop yield.